VR Sketch is an editing/visualization tool for architects. Currently integrates with sketchup, with more software coming in the future. If you want to learn more, see the main page. This blog post is about the current state of affairs in virtual reality for architecture from the perspective of VR sketch.

I don't think it's a secret that Virtual Reality is the future interface for architecture. Everyone is talking about it, looking at and investigating it. In this blog post I would like to do a review of the current potential of VR ecosystem, mostly focusing on the hardware and low level software. I'm deliberately not going to talk about the architecture software for VR, since I'm more interested in what's possible as opposed to what has been done.

First, let me reiterate the obvious - being able to see the building you're designing (or a car or a piece of wood, metal part or anything like that) is an incredible improvement over the status quo. It's akin to what-you-see-is-what-you-get in text editors. There is a good reason why Word is much more popular than TeX, punch cards got obsolete and we draw lines with a mouse as opposed to typing line(0,0,100,100). There are two more slightly less obvious benefits of using VR - you have a very good camera control, as humans are used to just moving their head to have new perspective and you have a clunky, but usable, 3D point input with the controllers. 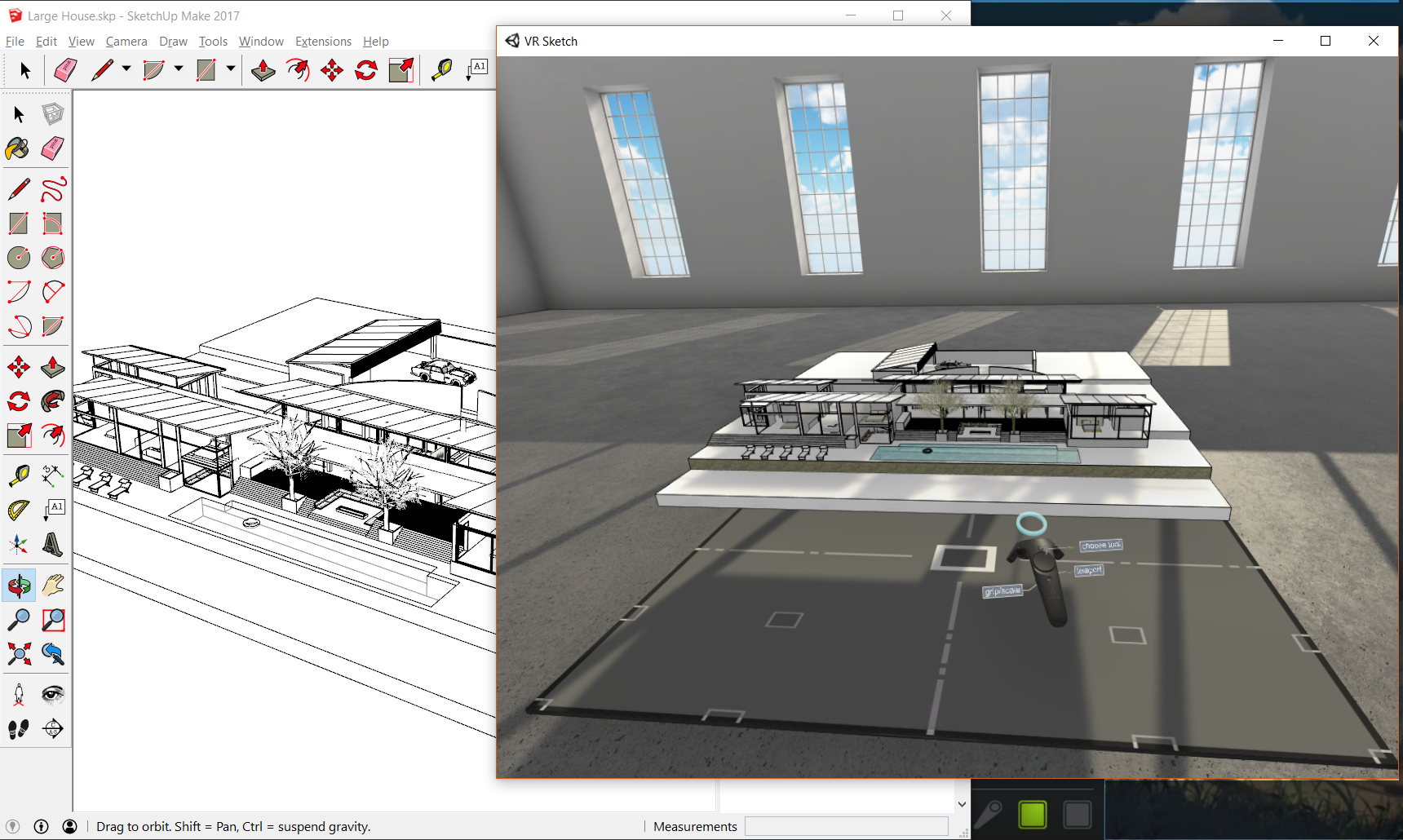 Right now the king in VR for architecture is visualizations, especially for the end client. There is a good reason for that - the minimum work required to get the visualization going is relatively limited and does not require deep interaction with controllers as UI. Doing visualizations that look good is tons of work of course, but that part is (mostly) left out to users themselves and not to the software. Obviously software has to allow it and some make it easier than others. The obvious next step is seeing the buildings as you design them and sooner or later one starts feeling that taking the helmet on and off is annoying. That's where editing and VR sketch, comes to play.

Which brings us to the long list of limitations that are present. I hope we will get around to addressing all of them, either in VR Sketch or in the hardware.

VR Sketch for now works only in HTC Vive, but there is nothing stopping us from working with other high-end headsets, other than having those headsets. The headsets are good. Unlike the low-end tier, the illusion is very real and the feel of space is good enough. I would not mind better resolution for photo realism, more text etc. but it's all coming. Disclaimer: I haven't had a chance to play with the new headsets - Vive Pro or Samsung Odyssey.

The controllers and the general input is the main limiting factor of doing editing right in the VR. One loses access to keyboard & mouse, while gaining access to relatively clunky controllers with limited buttons. The controllers themselves are based a lot on gaming controllers plus six degress of freedom. This works great for the primary purpose which is gaming! But for something more professional, like work of architects, the lack of precision, lack of buttons and lack of basic software research done in the terms of VR user experience is a serious problem. We believe we did a good job given the constraints, but there are very serious limitations that will make it uneconomic to do certain edits in VR. We believe that those factors will diminish over time -- we will improve the software, the controllers will get better and eventually disappear in favor of hand gestures and people will find it easier to do more and more stuff in VR. There is also issue of text/measurment input which will probably be solved in a bunch of ways, including voice support that we're working on.

Right now, since the building blocks are relatively large (think duplo instead of lego), we need large space in order to work on a building. That brings fatigue, due to large hand movements and requires a lot of free office space. In the future, we will see stuff getting smaller and smaller to the point where building buildings will remind a lot more about building stuff from legos, but without stepping on them, then it is right now.

Road to the future

The future is exciting :-) At VR Sketch we believe most architects will move to editing in VR for day to day operations within 5-15 years. We are a bit ahead of the curve here, but we will stick around to see it raise. You should follow us on twitter, sign up to the mailing list and download and use our software.

We are releasing new version with new cool features roughly every 2 months, so you should download and use our software right now and follow our development!